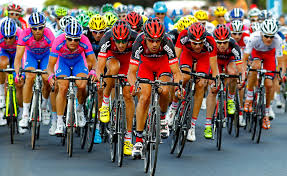 Why some cyclists get more knee pain than others.

So the Tour De France is in full gear and you’ve noticed you haven’t been able to shake that uncomfortable knee ache when you’re out on the bike. Chances are, you’ve got Iliotibial Band Friction Syndrome (ITBFS) and probably haven’t been managing it appropriately! Our resident Physio (Cameron) and Exercise Physiologist (Josh) have joined forces to explain the nature of ITBFS and how to manage it in the short and long term.

Anatomically speaking, the Iliotibial Band (ITB) is a long piece of connective tissue that runs from the hip to a bony point just below the level of the knee on the Tibia. When the knee is bent between 15-30 degrees, the ITB slides over the bony prominence on the outside of the knee and can become inflamed and irritable with repeated bending/straightening. When you consider the repetitive bending/straightening movement in cycling, it’s easy to see how the ITB can become irritated.

FUN FACT #1- Although seen in Cyclists, ITBFS is most commonly seen in runners and hence another name for ITBFS is Runner’s Knee. 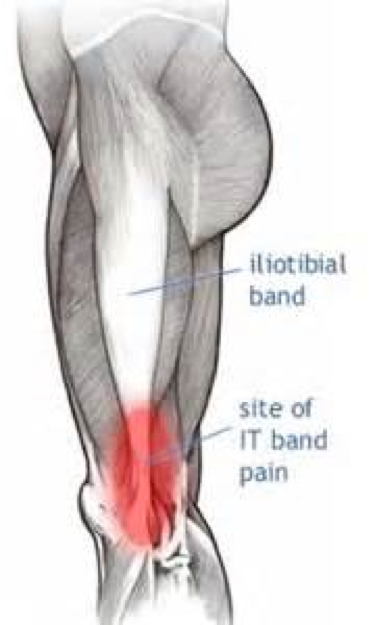 As you may find out following a gruelling session on the bike, there’s a large emphasis on the thigh muscles. So yes, we may build some killer quads (like Dr. Andrew Lim), but research has shown that due to this, 50% of the mechanical force produced when cycling is at the knee. With such emphasis on the knee its essential that we ensure the knee and surrounding structures are in good nick. The load seen on the knee whilst cycling is not necessarily a bad thing, but without adequate preparation and support, risk of injury can dramatically increase.

FUN FACT #2- 80% of the fibres that make up the ITB originate from the Gluteus maximus muscle. The rest come from Gluteus medius and Tensor Fascia Lata (TFL) muscles.

Essentially, altered hip/pelvic biomechanics will be the primary cause of ITBFS. Often you will find that certain muscles are being used in a greater or lesser capacity than they should be which will in turn create greater stress elsewhere down the biomechanical chain. In this case, the ITB is overloaded as it attempts to stabilise the hip and knee. Common de-stabilising patterns may include:

FUN FACT #3- Although in pictures the ITB looks like separate from all surrounding muscles, it actually attaches to the surrounding quad and hamstrings and so when these structures become dysfunctional, you are more prone to ITBFS.

What can you do about ITBFS?

For long term management and prevention of cycling based knee injuries, the key factors to implement are as follows:

So whether you are notching up the Km’s on the road (running or cycling) or just smashing out a spin class, ITBFS can really slow down your training goals. If you feel that you have ITBFS that is lingering and you need help getting rid of your knee pain, give our office a call 9955-5110 or book in online to see one of our team, so that we can help you get back on your bike pain free.